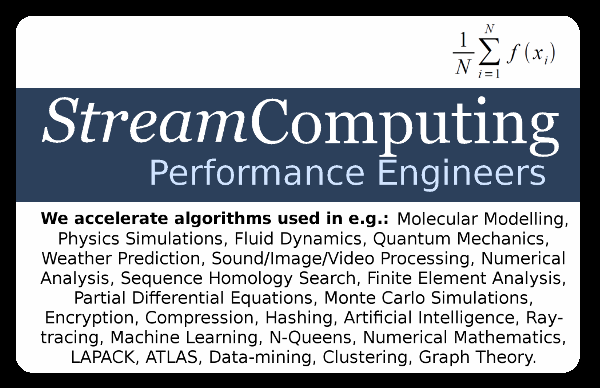 Which algorithms map is best to which accelerator? In other words: What kind of algorithms are faster when using accelerators and OpenCL/CUDA?

Professor Wu Feng and his group from VirginiaTech took a close look at which types of algorithms were a good fit for vector-processors. This resulted in a document: “The 13 (computational) dwarfs of OpenCL” (2011). It became an important document here in StreamHPC, as it gave a good starting point for investigating new problem spaces.

The document is inspired by Phil Colella, who identified seven numerical methods that are important for science and engineering. He named “dwarfs” these algorithmic methods. With 6 more application areas in which GPUs and other vector-accelerated processors did well, the list was completed.

As a funny side-note, in Brothers Grimm’s “Snow White” there were 7 dwarfs and in Tolkien’s “The Hobbit” there were 13. END_OF_DOCUMENT_TOKEN_TO_BE_REPLACED