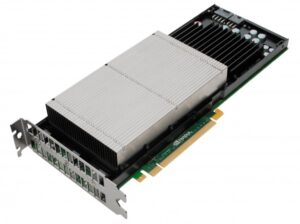 Two months ago I wrote about the FirePro S9000 – AMD’s answer to the K10 – and was already looking forward to this K20. Where in the gaming world, it hardly matters what card you buy to get good gaming performance, in the compute-world it does. AMD presented 3.230 TFLOPS with 6GB of memory, and now we are going to see what the K20 can do.

The K20 is very different from its predecessor, the K10. Biggest difference is the difference between the number of double precision capability and this card being more powerful using a single GPU. To keep power-usage low, it is clocked at only 705MHz compared to 1GHz of the K10. I could not find information of the memory-bandwidth.

ECC is turned on by default, hence you see it presented having 5GB. No information yet if this card also has ECC on the local memories/caches.

As both GPUs are single GPU, the comparison is easy this time.

The most important improvement is found in the double precision performance: from 0.095 TFLOPS of the K10 to a whopping 1.170 TFLOPS. The S9000 cannot compete here.

The memory bandwidth is not known yet.

Tesla K20 is a clear winner in these categories:

The only disadvantage is that the price has increased a lot, which is because of the high price NVIDIA has put on their double precision cores. As silicon is silicon, I am not sure why they do this – marketing-wise a smart move.

Where AMD always had the advantage in double precision, NVIDIA kicks in hard and makes it very hard for AMD to come up with an answer to this GPU. Know that a dual-GPU of the K20 is logically coming up next, and the 705MHz clock gives space to overclock it with 40% – if you want to take the risk. This rises the bar for both Intel and AMD to come up with a faster accelerator under 225Watt for the rest of 2013. I am looking forward to see their answers.

Even though the cards are very comparable on most specifications, they are a winner and loser in one of them.

I leave to you what the priorities are when to buy compute-cards – but make a list. Also take a look at the Intel Xeon Phi 5110P.

As usual, put in the comments your voice on points I missed or on anything you agree or disagree with. The comments are unmoderated, but be polite.

...  software? The simpler the software setup, the easier to answer this question. The more complex the software, the more the answer will ...

...  During the training pointer-questions will not be answered.Q: When exactly is it?A: Share the dates that suit you, and we'll use ...