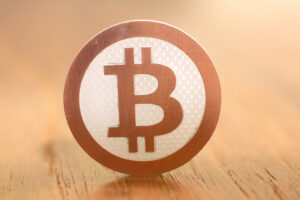 Every now and then I read stories on Bitcoins (Wikipedia-article), as GPUs are used a lot to “mine” Bitcoins. They have some extensive benchmarks, and also their discussions giving me insights in specific parts of accelerators like GPUs. Also is this group very upwards if it comes to accepting new techniques. Today something changed: they are a bank now. One of the thoughts I had with this, I’d like to share with you.

If you look at various types of currencies, you see they all have various goals (trade, power, resources, energy, properties, etc). The inequality and differences are even more important than the amount. Various currencies are entangled to a certain goal or resource, but there is nothing entangled strongly to technology. Here is where Bitcoins come in…

Bitcoins are entangled with compute-power – a current benchmark for technological progress.

In this article I’d like to share how the tech-economy and Bitcoins are entangled, seen from the perspective of computing. I left out a lot of the “rules of economy” and hope you can put these in – the below text is just to guide you through the thought-process only. Disagreement is only good – as we learn all from it.

There is some entanglement with technology. The prices of harddisks are constant, regardless the current size. But that has more to do with constant research-costs and constant production costs. There is not much differentiating between brands, if you exclude SSDs. If you look to processors, the costs of marketing, branding and sales come into the equation even more. Costs depend more on human demands at one side and R&D at the other side. So growth is a constant, but completely unmeasured and target-based.

High-performance trading is something different: it influences the economy a lot and has everything to do with technology. This focuses on a different aspect of an economy: trade and time-to-market, nevertheless the trade being made. Might even be applicable to the Bitcoin-economy.

Bitcoins are entangled differently. It does not matter how much dollars it has cost, the brute force potential of the compute-system is all that counts. To be more exact: the fastest compute-system decides how much one newly mined Bitcoin is worth, putting previous compute-systems in exact perspective. Even with Bitcoin’s Controlled Currency Supply the effect of the fastest processor cannot be neglected – I’l discuss below.

An economy needs trust to be stable. Especially now emotions (especially trust) have become a larger part of our economies – just check how much effort is being put in letting us trust the economy. If dependence on emotions increase or become less dependent on the work we (humans) actually do, the less stable the economy can become. With an increase of automation of human work, some expect that the economy will become less and less stable. A doom-scenario, but let take this as example to see what Bitcoins will do.

The most obvious about “Bitcoin-mining” is that it’s useless. You get something virtual by feeding energy to a very expensive GPU. And the moment you have paid off your GPU, faster GPUs are there and you have to buy a new one. The moment you are mining as fast as the average, you sort of earn hardly anything as that equals the inflation-rate. So no free interest, if you made a fortune. It compares to a mortgage in some way.

The word “Mining” is well-chosen, as in a full economy not everybody is digging precious stuff, but also providing services and goods by trade using the precious stuff as a currency. By making sure the currency is not something that is easy obtainable, inflating is limited. But also growth. Bitcoins are designed to be hard to obtain, but also to be harvested at a constant pace.

If I buy one computer for €1000 and it makes me 1000 Bitcoins using €200 of electricity, while another computer gives the same 1000 Bitcoins for less €s in the same time, then this could influence the exchange-rate between Euros and Bitcoins.

If more people mine Bitcoins, the price could drop. But as also the people within the economy would grow, this stabilises the system.

The more interesting part comes when a new technology comes in. We have seen it when GPUs started being used – Bitcoins harvested at the level of CPUs became worthless. Now with every faster accelerator coming up, the one who is first with buying these, has an advantage. This advantage is because if you mine faster than the average (more GFLOPS/€) and with that you’ll cause some sort of inflation, which will be noted by the market with some delay.

Even with large technology-increases, Bitcoins can be mined fast enough to recover the economy. If you missed the boat, you’ll see your fortune deflate. If you’ve read my article about Molybdenite and Graphene, then you’ll see that those big jumps will happen again.

Great that we have a currency of wich its inflation tells us the progress of processors. Problem is that there is no one type of compute. Radeon-cards are very popular to mine Bitcoins with, as they bring in the most Bitcoins/Euro. But different compute-problems are faster on accelerators other than Radeons. If mining would be a multi-step process based on various compute-problems, it would have been better.

Besides that the future will bring us processors which are less fit for Bitcoin-mining, there lures another potential trap. As technology makes big jumps it is to be seen how stable they can make an economy based on computing alone. Or does it? Computers have that much influence on our economies, that a normal economy is influenced as much.

The growth-rate of compute enables our potential – and it’s best to measure it with something really close. Bitcoins could be a shot in the right direction.

...  CUDA/HIP and OpenCL, where you focus on making the core compute part. The third goal is learning from a Q&A. Here you can ...

...  selecting good algorithms that had both needed a lot of compute and were representable within the finance industry. We could not ...