In OpenCL large memory objects, residing in the main memory of the host or the global memory at the accelerator/GPU, need special treatment. First reason is that these memories are relatively slow. Second reason is that the most times serial copy of objects between these two memories take time.

In this post I’d like to discuss all the flags for when creating memory objects, and what they can do to assist in this special treatment.

This is explained on this page of clCreateBuffer in the specifications, but I think it is not really clear. The function clCreateBuffer (and the alike functions for creating images, sub-buffers, etc) suggests that you create a special OpenCL-object to be given as argument to the kernel. What actually happens is that space is made available in main memory of the accelerator and optionally a link with host-memory is made.

When defining a kernel, you define each memory-object as read-only, write-only or read-and-write. The memory-objects you create must be of the same. Just like with the kernels, you can pick one:

The beginner’s mistake is to read these flags from the perspective of the host, as they are defined in host-code.

In case of “CL_MEM_READ_WRITE” it is completely unpredictable what will be done ate the host. Describing how the host will use the memory-object would give compiler-hints for possible optimisations, especially when working with PCIe.

Flags to specify this were introduced in OpenCL 1.2. You can pick one:

Personally I’d suggest you only use it with “CL_MEM_READ_WRITE”.

Officially these flags can also be used in combination with READ-ONLY and WRITE-ONLY:

Please let me know, if you have encountered cases where one of these two combinations resulted in faster transfers.

Where it gets interesting (and messy) is when is defined how host and device memory interact. This we can describe with host-pointer flags.

First let have a look on the normal way to send over a buffer of floats to the device:
[raw]

[/raw] Here p_input is a pointer to an array of floats, cl_input an OpenCL memory object.

Let us see the definitions of the flags, which influences how data is transferred between host and device.

NB: Even if not explicetly defined, the host access flag CL_MEM_COPY_HOST_NO_ACCESS cannot be used in combination with a host pointer flag.

The flag CL_MEM_COPY_HOST_PTR results in only one big difference with the default. It does the allocation of device-memory and copying to the device in one step. The code looks like:
[raw]

[/raw] It is a matter of taste, what you use (and I personally don’t use this version). It has no advantages for faster transfer, known to me. This flag is not meant for getting data back.

There are cases known that buffer-object ‘p_input’ in this example cannot be used by clEnqueueWriteBuffer or clEnqueueReadBuffer; in that case CL_MEM_ALLOC_HOST_PTR needs also be specified too. Be careful with this, as this is a contradictive contract.

The flag CL_MEM_USE_HOST_PTR enables the so called “pinned memory”. Pinned memory makes it possible to use DMA-transfers over PCIe, which is much faster.

The idea of pinned memory is that there is an exact copy of an object at both the device and the host. Exclusive access rights is given to or the host or the device.

This is the above example with pinned memory:
[raw]

Note that the function clEnqueueMapBuffer has many options for blocking and non-blocking execution – so above example might not be optimal for your case.

If host and device are the same, what to do then? Best is if the pointer to one memory-area could be shared. Problem is that this changes the whole idea of the current computer-model and this takes time. Say you have a long program and you want the GPU to compute on a part of a buffer – this implies that the GPU should have temporary full access to CPU-memory. This is potentially very dangerous (GPU-viruses) and will not become available over night.

Best is to use pinned memory. If the new models have been worked out, the code can be faster without any code-change. Now it copies memory over at the speed of main memory (25GB/s).

Update: ARM MALI supports exactly this. You need to set the flag CL_MEM_ALLOC_HOST_PTR.

Next step is figuring out asynchronous and non-blocking transfers. Have fun! 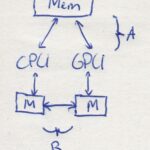 ...  to design a model where 2 (or more) processors can access memory without dead-locking each other. NVIDIA just announced CUDA 6 and ... 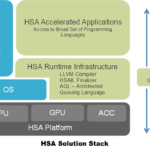 ...  hardware-software projects. It is pretty close to OpenCL SPIR, which has comparable goals. Don't see them as competitors, but ... 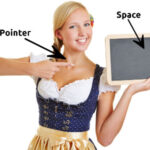 Basic concepts: malloc in the kernel

...  questions, as it gives another view on a basic concept of OpenCL. Simply put: you cannot allocate (local or global) memory from ...