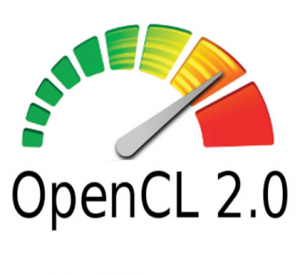 We were too busy lately to tell you about it: OpenCL 2.0 is getting ready for prime time! As it makes use of the more recent hardware features, it’s therefore more powerful than OpenCL 1.x could ever be.

To get you up to speed, see this list of new OpenCL 2.0 features:

I could write many articles about the above subjects, but leave that for later. This article won’t get into these technical details, but more into what’s available from the vendors. So let’s see what toys we were given!

A note: don’t start with OpenCL 2.0 directly, if you don’t know the basic concepts of OpenCL.

AMD has support on every new GPU, APU and CPU, like the R9 300 series. The AMD OpenCL 2.0 driver is also compatible with the following AMD products.

The driver has support, but is known not to be fully compliant yet. It is in the latest drivers, called “Omega”, which you can download via their website: Linux 64 and Windows 8.1 64 bit.

The SDK you can download here. AMD blogged about the beta SDK here, describing all the 20 (!) samples written/updated for OpenCL 2.0.

AMD has been blogging about new OpenCL 2.0 concepts for some months now.

OpenCL 2.0 support is limited to CPUs with Intel HD Graphics GPUs of type 5300, 5500 and newer. On older CPUs there is support for OpenCL 1.2 only.

Note that early Broadwell systems with HD Graphics 5300 do not support fine grained buffer Shared Virtual Memory. See the samples and articles below for more information.

There is no support for XeonPhi anymore, unfortunately.

The 15.1 driver can be downloaded here.

Intel has a central starting point for OpenCL here, with links to software and points of interest. Most interesting are the Experimental Development Environment (free) and Vtune for OpenCL (paid software)

Below are the samples for Intel. Some of the articles also have code.

More samples here – most before September 2014 are for 1.x. Later samples at least mention 2.0.

Not yet, but they do took “pipes” from the 2.0 specs (under some conditions). We’ll discuss this in a separate blog article.

Even though they lead the Khronos group, they prefer to only implement the new standard in their proprietary CUDA language. On who invented the new functionality in OpenCL 2.0, I can only say one thing: NVidia doesn’t have patents to stop OpenCL from “copying”.

There are rumours that Nvidia will start supporting 2.0 this year, but are not confirmed. A new discussion on it is on LinkedIn groups. Let other know, if you know more.

Want to port your software to OpenCL 2.0?

If you want to target AMD hardware next to Nvidia CUDA, then now is a good moment to go for AMD + OpenCL 2.0. For Intel it’s probably best to support both OpenCL 1.2 and 2.0 for now – it is possible to support several versions of OpenCL.

The above information should help to get you going, to make the right design decisions and to start porting. Know that several 2.0-concepts are quite easy to upgrade to.

If you want to know if it’s the right time for you to go to OpenCL 2.0, just ask.

...  drivers for Windows NVIDIA mentions support for OpenCL 2.0. This has been the first time in 3 years since OpenCL 2.0 has ...