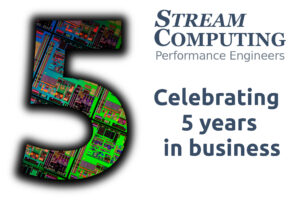 In January 2010 I created the first steps of StreamComputing (redacted: rebranded to StreamHPC in 2017), by registering the website and writing a hello-world article. About 4 months of preparations and paperwork later the freelance-company was registered. Then 5 years later it got turned into a small company with still the strong focus on OpenCL, but with more employees and more customers.

Without them, the company would never even existed. Thank you!

Why the choice for going full on OpenCL?

The main fight for the first four years was about CUDA versus OpenCL. CUDA has been a much safer option to go for, while I kept saying I wanted to keep going for OpenCL. Now it’s a typical example of “do things differently than the majority”, but back then it was not that simple. I can now share three reasons I had for that. I hope at least one reader starts a business around an open standard that is being created right now, knowing that in 3 to 5 years it will be a growing company.

Building is something you do yourself

I always believed that my company would be successful. Eventually.

Since the beginning I strongly believed that one person could make a change, when having the right strategy. Three years ago, I wrote a blog-post on StreamHPC’s two-year birthday. I put an image with a motivational text. Secretly it told about the way I built up the business and why I chose OpenCL over CUDA: if nobody sees a strong ecosphere around OpenCL, why not help build it yourself?

When I had discussions where arguments like “But the big companies do this and this” were used, then I preferred to quit the discussion – we were simply not on the same line and it was useless to discuss further. Why follow the status quo, if you don’t agree with the status quo? I believe that in current times you are simply too vulnerable when you do what the big companies want you to do.

Baking a larger cake, before taking a slice

The OpenCL-cake will be much, much lager than the CUDA-cake.

NVidia has been very successful with CUDA, and many companies wanted to have that success. The good thing was that all those companies only had OpenCL as option. Still many companies were hesitating and did not have a clear compute roadmap. I talked with them about growing the OpenCL-cake far bigger than the CUDA-cake: “first make the cake big enough, before competing with the others”. Not all companies had a sufficient combination of a clear roadmap and a good strategy. Especially the strategy game is hard to do in a group, so it took a much longer time.

It was good that the Khronos Group got a lot stronger in the past years. Just see what they’re doing with Vulkan right now, to understand what I mean. This stronger fist helped a lot in uniting all those vendors in baking the largest cake ever. It’s good energy.

Always focusing on the long term

Everybody goes for the short term, including you. Fight it.

Though some might believe that CUDA will be there for ever, I totally don’t think so. For me it’s the same as asking if certain keywords will be in one programming-language only. Simply put: an open standard will always win in the end, as the majority doesn’t want to have a dependency on a company when it comes to basic functionality. Therefore the question is not *if*, but *when* something becomes basic. To postpone this moment, is a game. It’s a game NVidia plays very well, unfortunately for OpenCL. The same game I play from the other side, together with all my partners – and combined we’re much bigger than NVidia.

Everybody can see that the heat of OpenCL is steadily building up. We crossed the chasm, and you see that CUDA’s growth is not as it used to be. Since over a year the official status of OpenCL is “catching up”, meaning we only need to build. It’s no coincidence we’re doing quite some CUDA to OpenCL translations.

We’ve had a few logos over the years. The first version was used for about three years. Some might still remind it.

In 2013 the blue bar disappeared, and the slogan “We accelerate” got replaced by “Performance Engineers” and embedded in the logo. We still accelerate code, by the way. 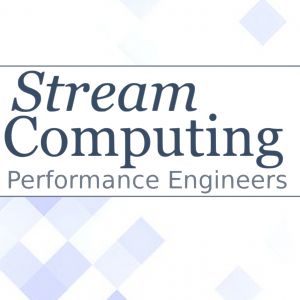 Not much later, in the beginning of 2014 small capitals were used. The regular version got closer to the square version.

Over all those years the blocks never disappeared – those represent the multiple cores, but also parts of code that are active. They’re not really regular, as code is never as simple. I always suggest people who start a new company not too think too much on the logo – it will evolve with the entrepreneur anyway.

We will always work for growing the OpenCL-ecosphere from a software and hardware-perspective. This includes growing our partners-network of hardware-vendors, serving more customers with faster code, trainings and organising more OpenCL-related events.

I hope that you stay with us in the coming 5 years of OpenCL evolution. We recently learned that the actual core of the project slightly moves to SPIR-V, that next to Altera also Xilinx is fully jumping on the OpenCL-wagon with their FPGAs, that OpenCL is getting most traction in low-power solutions, and that OpenCL gets stronger in the embedded processor market. Subjects like above I’ll keep sharing with you on the blog, for the five years to come and beyond. StreamHPC is focused on staying and growing a partner for who needs developers who know both hardware and software.

Thanks for listening and for sharing your thoughts and your opinions with me!

...  the group's lead, professor John Cavazos, passed away 2 years ago. We hope he would have liked that his work has been ...