If you look through the history of version 1 to 5, you see different names and different subsequent extensions, like “SSE 4.2a”. What’s more interesting for us is where to find the “packed” instructions. Packed stands for a bundle of data, so actual parallel instructions; not massively parallel by the way. The last two letters of the instruction are important for us: Packed or Single, Precision. Precision can be Single, Double, Word, Quadword or Binary. Later (in SSSE3) packed-instructions start with a P, and SSE4 mixes both naming-conventions. So all xxxPx and many Pxxx instructions are of of interest. If you check the details of those packed instruction, you see that the single-precision have twice a much input as the double; and that’s why it’s called “packed” and is directly the limit of SSE.

SSE has the most important instructions introduced, and is well explained by tomesani.com. SSE2 completed SSE1 for all types. SSE3 (Pentium 4 / Athlon 64) adds instructions to add and subtract the multiple values stored within a single register. SSSE3 introduces only packed instructions, such as permuting the bytes in a word, multiplying 16-bit fixed-point numbers with correct rounding, and within-word accumulate instructions. SSE4 (Core2 duo) had a two very interesting additions: “Compute eight offset sums of absolute difference” and the dot-product.

There is a lot more to read on the instruction-sets, but I leave it by this, since I’m not an expert on this. If you know a good article, just put it in the the comments.

AMD’s SSE5 exists out of XOP, CVT16 (together AVX-like) and FMA (fused multiply-add, to be implemented by Intel later). Since AMD has said they will implement AVX too, I focus on AVX only for now. For a complete overview, see AVX on Wikipedia and Intel’s AVX-page.

The instructions start with a “V” for Vector now. But how to get vectors in, while the SSE-instructions were restricted by the maximum pack-size? The answer lies in a VEX-prefix; according to Wikipedia this allows instruction codes to have up to five operands, where the original scheme allows only two operands (in rare cases three operands). It also allows the size of SIMD vector registers to be extended from the 128-bits XMM registers to 256-bits registers named YMM. There is room for further extensions of the register size in the future.

So in short, they have doubled the register-size. If we look at single precision (32 bit) and 1 core only for now, that brings us to:

A CPU’s clock-speed is roughly 4 times higher than a GPU’s, so a quad-core using AVX would give 8 x 4 x 4 = 128 GPU-cores-equivalents. That’s bull would most say; I agree, but it does give an idea of its parallel potential. 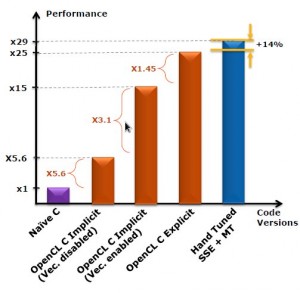 Copying a block of memory to the GPU takes a lot of time, since the PCIe’ bus-speed is limited to 8 GB/s (64 Gb/s). Now you say that DDR3 is not more than twice as fast as that, you have to know all the data has to via the CPU and thus the actual speed is of the PCIe is 4GB/s. Also there is no possibility for CPU-extras such as caching – although I haven’t found clues that support the idea that OpenCL for Intel uses CPU-caching directly. You also see a lot of benchmarks of OpenCL both with and without transfer-times, like this one on Bealto where around one eighth part is consumed by transferring data.

Here is where architecture-optimising will make a big difference: because of the transfer to the GPU, the setup of the programming (i.e. need for batch-loading and more memory-bandwith available) the software will be totally different than one written for a a CPU.

This is actually a subject on its own, so later more on transfer-times and latency. I wanted to make a point needed for the conclusion that it takes clock-ticks to get the data to and from the GPU.

The image shows how Intel managed to get 25 speed-up of a N-body simulation on their CPU, but better benchmarks can be expected Q1 2011. Read their full presentation here.

I was missing the extensions for sure: they are not as parallel as GPUs, but there is clearly more parallel going on in a CPU than parallel memory-buses and multiple cores. So what are the big advantage for using OpenCL on a CPU?

The performance of an embedded OpenCL-capable GPU on a CPU might be placed between AVX and a separate high-end GPU, but overlaps mostly with AVX and therefore the current focus on AVX is a logical decision. The first benchmarks of OpenCL-on-SSEx now come in, but for interesting results we have to wait until the launch of Intel Sandy Bridge in a few weeks.

For sure we can open up al thrown away projects where the PCIe-overhead was an issue.

...  or replaced if time is getting too limited. Day 1: OpenCL/CUDA Foundations This is close to our standard OpenCL crash course. We ...

...  learn a lot if you make it work. When applying this to OpenCL, you quickly get to a situation that you want to run one.cl file ...