What brings 2017 in technology? Gartner gives their vision with the start of each year to give insight in which technologies to invest in. When looking through them, the most important enabling technologies are the GPU and Internet-of-Things (IoT) – see the image below. Whereas the last 4 are IoT based, the first 4 would not have been possible without GPUs. 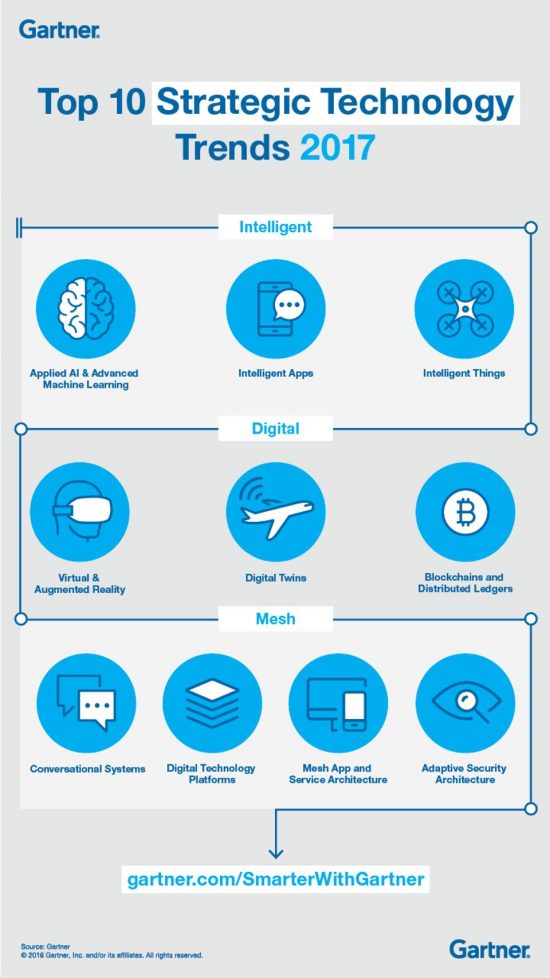 The middle two are more mature technologies, as they’re based on technology progress of many years – it happens to be that the GPU has played a big role to get here. And ofcourse not only GPUs and IoT are the reason these 10 are on this year’s list. 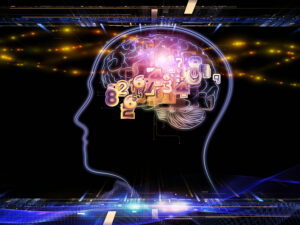 In short: AI is everywhere, from the mobile phone and desktop to the servers and cloud. The lion-share of AI-processors are GPUs.

NVIDIA saw it coming well in advance, but also AMD will launch a 25 TFLOPS FP16 GPU (the “MI25”) later this year. Then a server with 8 GPUs will have 200 TFLOPS of AI-compute, 40 times faster than an average desktop of today. Intel, Xilinx and Altera are also jumping in the business – it’s waiting for the independent, broad benchmarks to see how well they compete with GPUs.

Powerful hardware as the discussed 200 TFLOPS GPU-server is simply needed, as it takes weeks to train a neural network and applying the network to new data also is very compute-intensive.

The field of intelligent guesses based on observed experience. It’s wildly popular as you might have noticed – also we use it to solve parts of the projects. (A fun fact is that approximation computing never grew that fast as AI, because reducing precision lowered confidence in the models).

GPUs are being put literally everywhere as the de-facto processor to do AI. Each type of market seems to have a preferred way on using self-hosted or cloud-hosted GPUs.

For intelligent apps Gartner focuses on virtual personal assistants for making every tasks easier. Think email, security tooling, ERP and other business applications. It’s an interesting field, as it involves multiple non-technical disciplines, like psychology and philosophy. “How do we do these tasks? Let’s put that in a machine”

Here also GPUs handle the AI: more specifically hosted GPUS, as you can find on large cloud suppliers like Amazon, Google and Microsoft.

Although lots of data is transferred over-the-air to be processed on hosted GPUs, much is also processed on embedded GPUs. Special purpose ASICS (like Google’s TPU) and large DSPs are strongly competing with GPUs – several of these embedded AI devices can be programmed with OpenCL.

Digitialising our world out there. Can we conquer the problem of space in a totally different way?

Where the CPU has set the pace of the digital sector for decades and the GPU focuses mostly on the latest games, now the GPU is setting the pace of many markets and creating new ones. Machine Learning has already been discussed – here are three other markets heavily influenced by GPUs.

The domains of Virtual reality (VR) and augmented reality (AR) are fully in the domain of GPUs. With every new generation GPUs, more pixels can be processed and more special features have been added to show a 3D world on the AR/VR-glasses.

Now the GPU can render high resolution images in real-time, the pixels on displays are dense enough and the accelerometers are precise enough, the right conditions for VR and AR have been set.

The “Digital Twin” is taking simulations a step further. Digital twins use data from sensors installed on physical objects to represent their near real-time status, working condition or position. Things like shape, position, gesture, status and motion can be shown on the screen (including VR), to give quick visual feedback.

Digital twin can be also used for monitoring, diagnostics and prognostics. For monitoring and diagnostics there is less need to go there or send a drone. Prognostics is where AI can be used, and thus GPUs.

This is now the field of connected sensors. GPUs are required here, but those are not key why it’s advancing only now – IoT would be a bigger influence.

We all remember how Bitcoins started and GPUs where used to beat all CPUs in “mining” them. The interest now goes to the unique way these bitcoins (and its offspring) are being traded – the provided guarantees and security by design that beat the current methods. This could finally make cheap worldwide transactions possible.

The GPU has done its work already. Now its up to fintech companies to come up with bright new products&services using this technique.

Gartner defines the mesh as the dynamic connection of people, processes, things and services to be able to support an intelligent digital ecosystems. In other words: AI combined with IoT. They all need a distributed network and Gartner is hinting towards lots of rewriting of current software to make them future proof.

For these the GPU-factor is a lot less than the IoT-factor. But when you combine 1000’s of IoT-devices, the amount of data increases a lot and GPUs can be used to make sense of that data – see trend no. 1.

7 years ago it was impossible for me to explain that GPUs-for-computing is a thing – I was told that GPUs are for graphics, not for matrices. Now almost unreal technologies are possible thanks to combining GPUs with the Internet.

We’re looking forward to keep programming GPUs in the years to come and help our customers remain significant. When GPUs are being replaced, you’ll hear it from us first.

...  found a finance benchmark for GPUs and wanted to show we could speed its algorithms up. Like a lot! ...  of the original ...